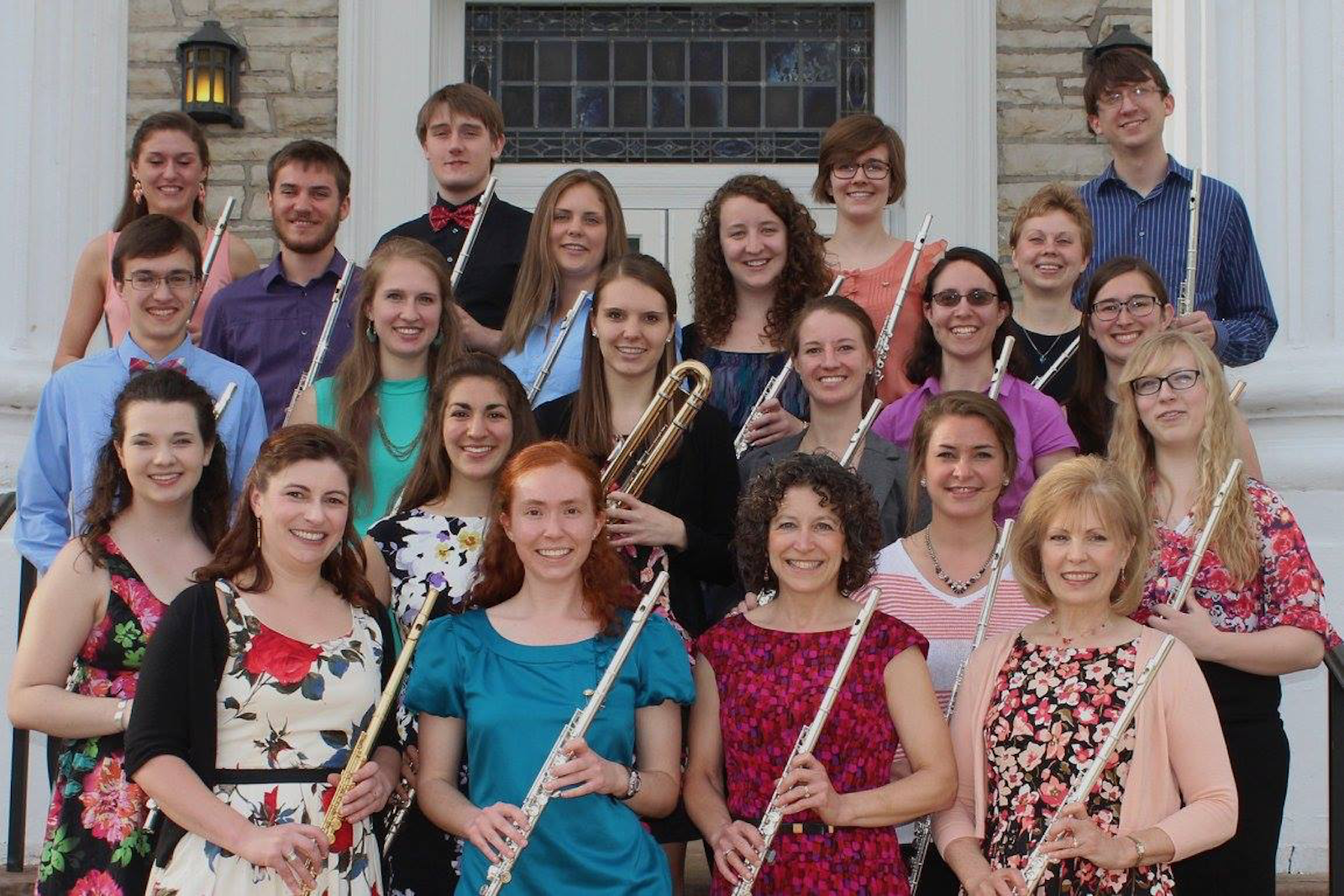 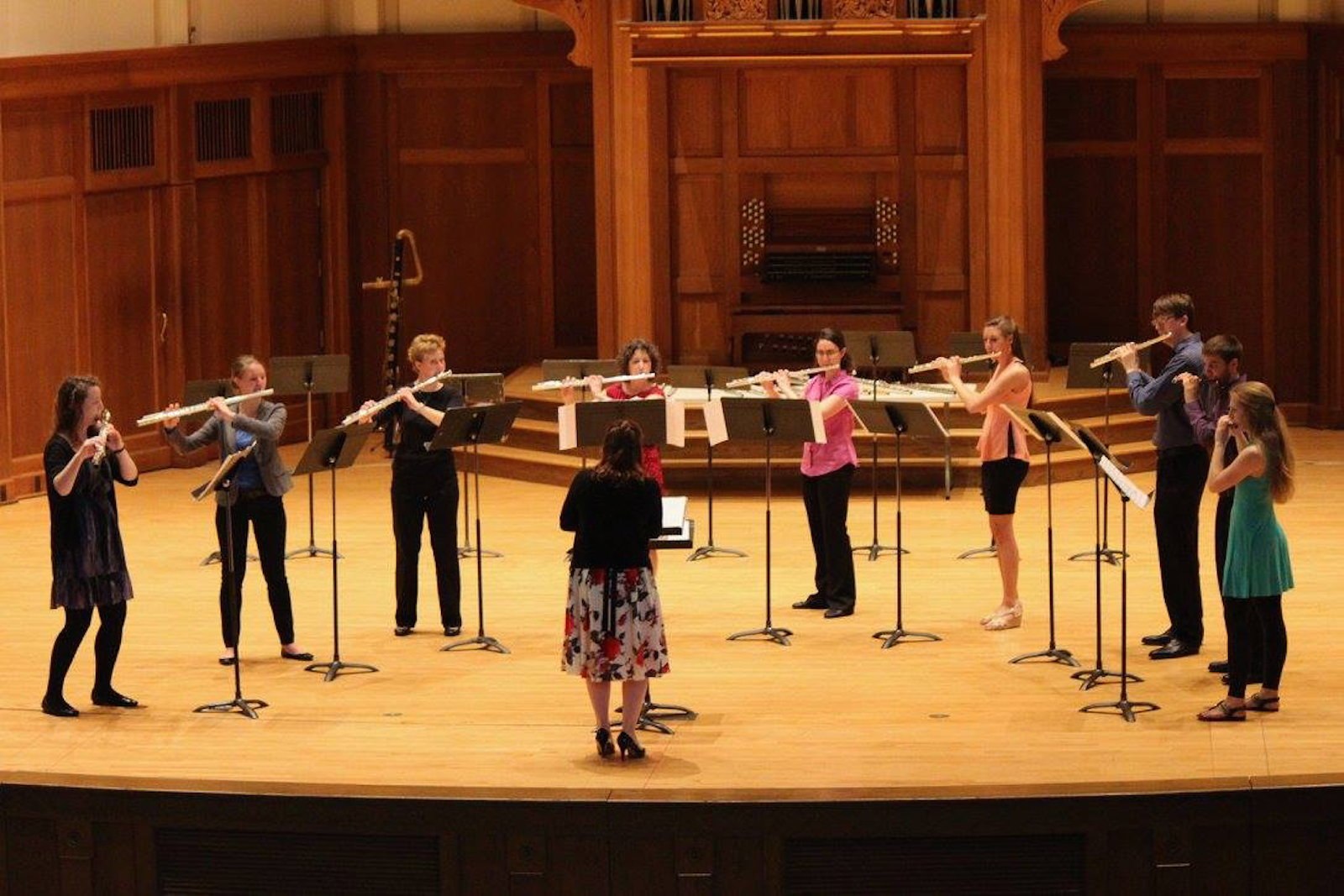 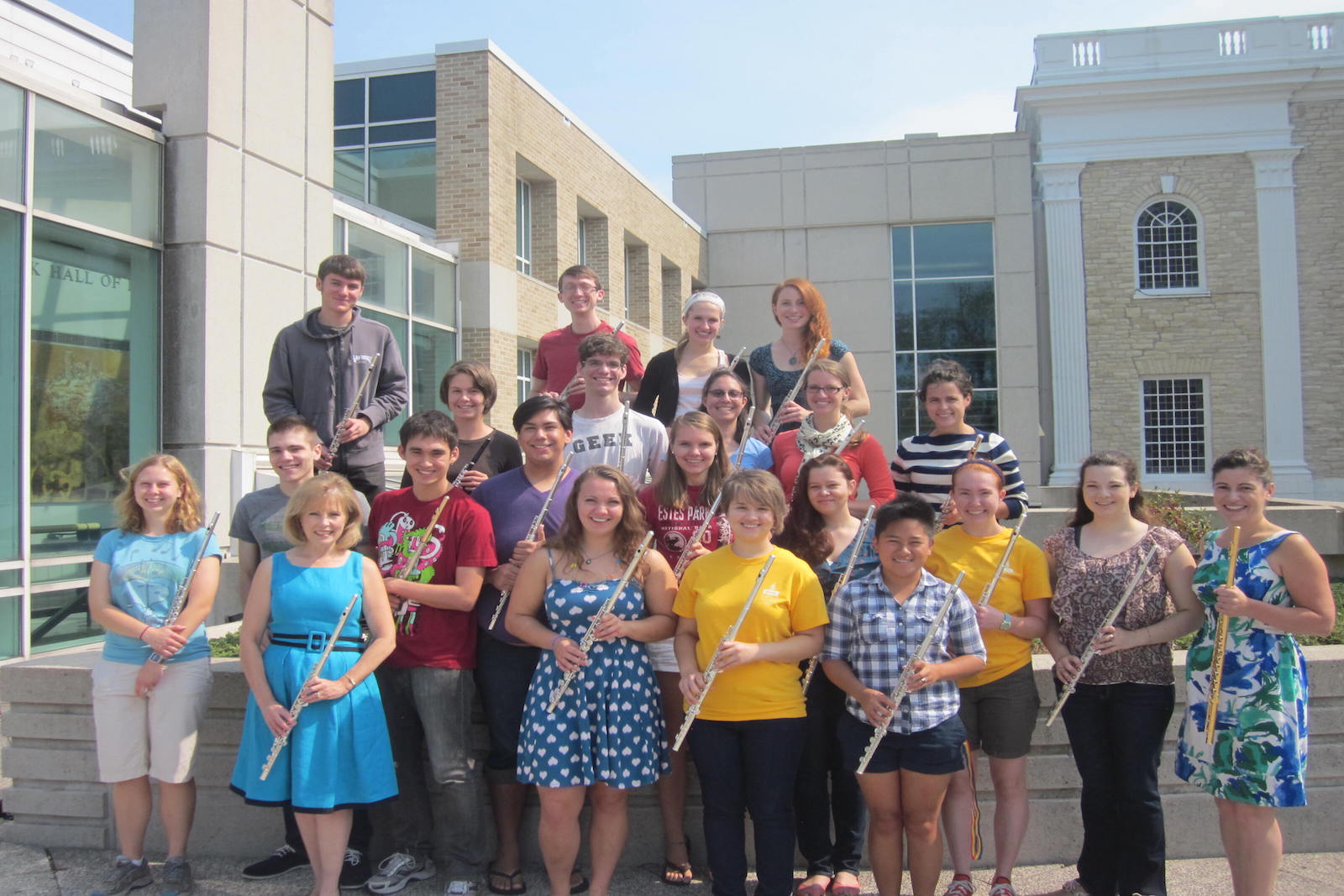 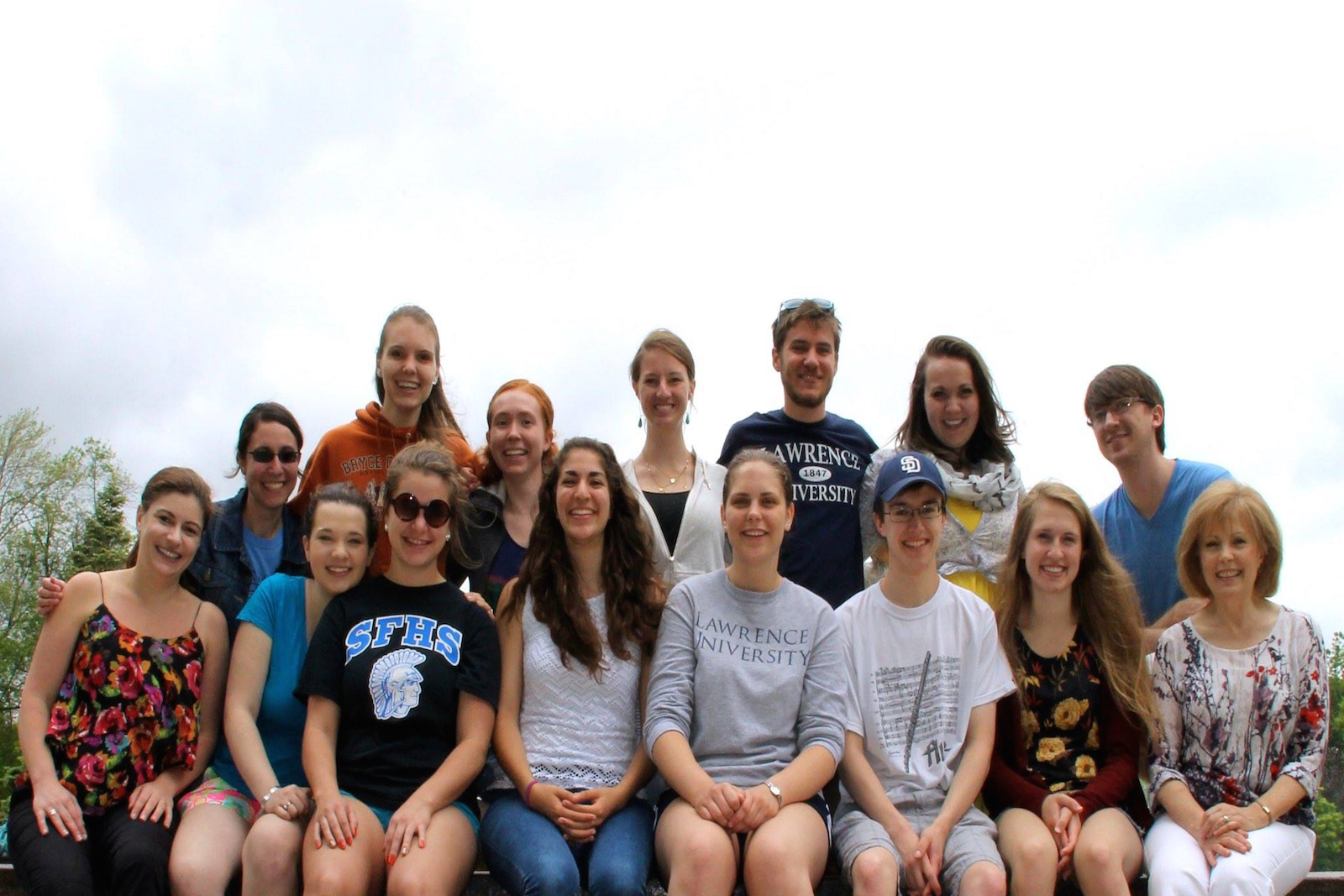 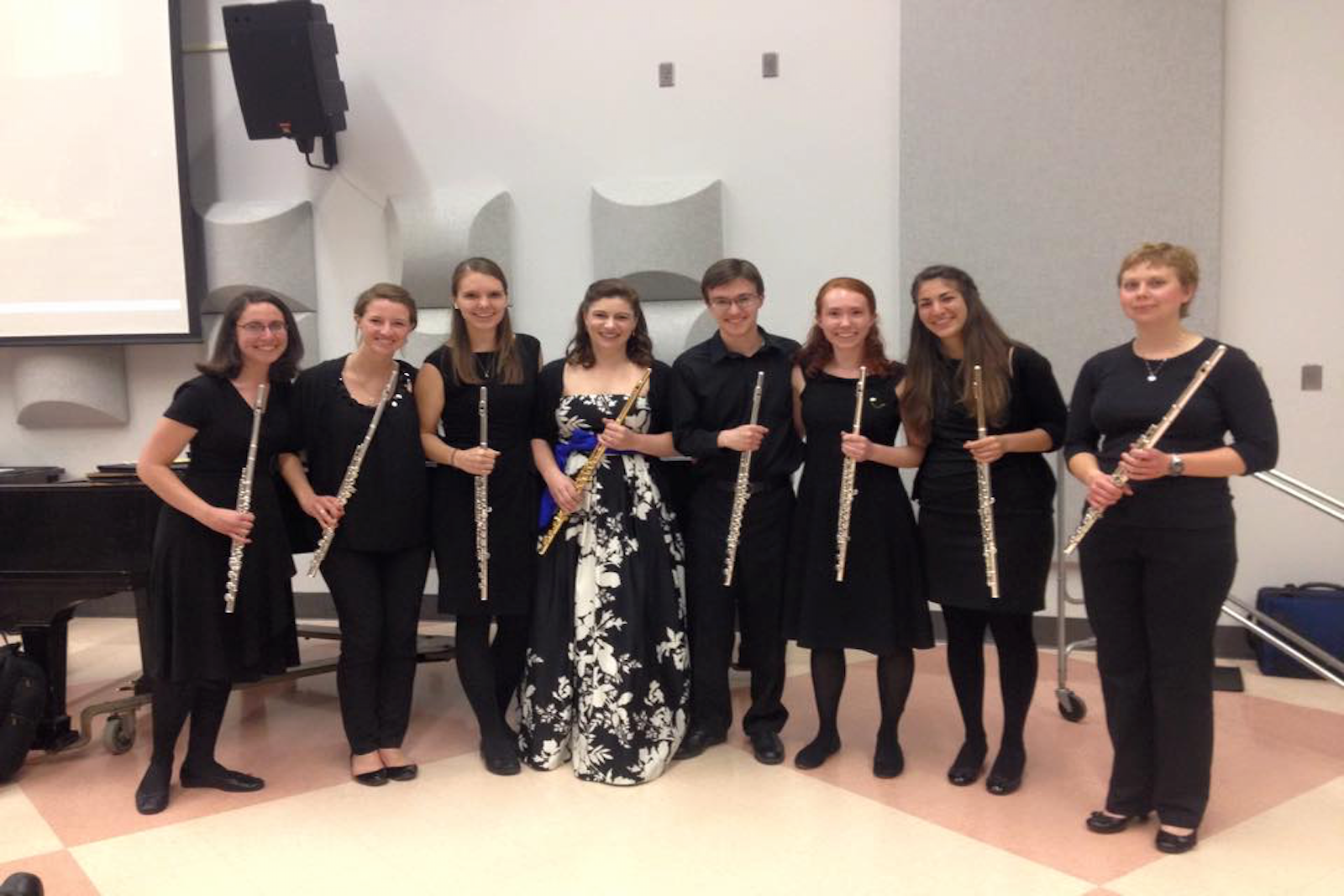 Zoe Nicole Adler (Long Beach, CA) is a sophomore student pursuing a Bachelor of Music in flute performance and a Bachelor of Arts in “something interesting”. Currently she is performing in Lawrence’s Wind Ensemble and plays in several chamber groups. Zoe is a huge fan of hard rock music and spicy food and aspires to work at a bourbon distillery in Kentucky post-graduation.

Marcus John-Edward Anderson (Milwaukee, WI) is a freshman pursuing a music degree in flute performance and music education. An alumnus of Rufus King International High School, Marcus has played flute for 7 years under the tutelage of the Wisconsin Conservatory of Music's instructors as an annual scholarship recipient. During his high school career, Marcus performed consistently at the state level of the WSMA competition, and participated in the Milwaukee Youth Symphony Orchestra flute ensembles. Marcus intends to use his teaching to give back to his community the love of music that has inspired him.

Julianna Basile (Santa Rosa, CA) is a candidate for the Bachelor of Music degree in music education and flute
performance, with a minor in ethnic studies. Throughout her studies at Lawrence she has been a member of the Orchestra, Wind Ensemble, and section leader of Symphonic band. Julianna grew up a classical musician but Lawrence has challenged her to explore creative play and improvisation. While at Lawrence, she has taken jazz lessons with José Encarnación, performed Gamelan with Pak Dewa and been a member of the non-western Lawrence Percussion Ensembles. In spring of 2018 she participated in a master class with the Brasil Duo, learning about the culture and performance of Choro music. Last summer she was awarded the Fred Strum Inspiration Award which helped fund her summer internship with the Harmony Program. (Harmony is an El Sistema inspired program in the South Bronx that provides free music education to 1st-6th grade students). Other than music, Julianna is the co-president of the Film Photographers of LU, loves writing poetry at coffee shops, speaks conversational American Sign Language and is determined to learn and practice secondary languages such as Spanish. Julianna believes every child is a musician and that he or she deserves an equal opportunity to a culturally responsive music education. She is excited to begin student teaching in Chicago next fall!

Isabella Cisneros (Lombard, IL) is a freshman at Lawrence University and is pursuing a double degree in flute performance and environmental studies. She has been a member of the Illinois All-State Honors Orchestras and recently performed in the NAFME All-National Honors Orchestra, which took place in Orlando, Florida. She has performed as a soloist winner of the senior concerto competition at her high school before coming to Lawrence and was awarded “Outstanding Senior in the Music Department”. She is currently a member of the LU Wind Ensemble and Flute Ensemble.

Alison Gauvreau (Palatine, IL) is a freshman student pursuing a Bachelor of Music in flute performance. She was a member of the Schaumburg Youth Symphony Orchestra and has participated in honors orchestra and band at her high school. Over the past summer, she played in the pit orchestra for the Schaumburg Summer Theater’s performance of Ragtime. She is currently a member of the Symphonic Band at Lawrence University.

Juan Hernandez (Hampshire, IL) is a freshman at Lawrence University, pursuing a degree in flute performance with a minor in pedagogy. He was principal flute of the Elgin Youth Symphony Orchestra, and was part of the Earl Clemens Woodwind Quintet. Juan has also participated in the Illinois Music Educators Association District and All-State Festivals. He has performed in master classes for Bonita Boyd, Marie Tachovet, Luke Fitzpatrick and Jennie Brown and recently attended the Birch Creek Summer Music Institute.

Lorenna Klobuchar (Muskego, WI) is a freshman at Lawrence University, pursuing a degree in flute performance with a minor in music theory. Last year she was selected to perform the Flute Concerto by Carl Reinecke with her high school wind ensemble and was also selected as a soloist for the school cabaret night. She has performed in pit orchestras for various productions, playing guitar, banjo, clarinet, saxophone and flute. She was apart of the Youth Wind Orchestra of Wisconsin for three years, and also performed with the Youth Wind Ensemble at UW-Milwaukee and the High School State Honor Band. Lorenna has studied flute with Sonora Slocum and Erin Lesser. She is currently a member of the LU Symphonic Band and Flute Ensemble. Outside of music her other love is tennis, which she played for four years on her high school team and now plays for fun.

Carmen Magestro (Cudahy, WI) is a sophomore at Lawrence University pursuing a Bachelor of Music in flute performance with a minor in flute pedagogy along with a Bachelor of Arts in chemistry. She was part of the WSMA State Honors Band, the Milwaukee Youth Symphony Orchestra and won the WSMA Exemplary Soloist award of 2016. Carmen is currently in the Lawrence University’s Wind Ensemble and the Rose Bud Quintet. She hopes to teach young flutists and perform in a chamber ensemble or symphony orchestra one day.

Bianca Pratte (Walnut Creek, CA) is a senior at Lawrence pursuing a Bachelor of Music in flute performance and a Bachelor of Arts in psychology. During her time at Lawrence, she has served as principal flute for the Symphony Orchestra, Wind Ensemble, Opera Orchestra, participated in Cantala Women’s Choir and Concert Choir, premiered several student compositions with various chamber ensembles, performed at community centers in Appleton, Chicago and Minneapolis, and played accordion with the Heavy Metal Ensemble of Lawrence University and Lawrence Symphonic Band. In 2017, she was the winner of the Lawrence Wind Ensemble Concerto Competition, where she performed Mouquet’s La Flute de Pan. Bianca was also the 2015 Wisconsin Flute Festival Collegiate Competition Winner, the 2015 NFA Collegiate Flute Choir Winner, the 2016 MTNA Young Artist Woodwind Competition State Winner for WI, and the 2018 Summer Flute Institute at MSU Denver Young Artist Competition Winner. This year, Bianca will serve on the Dean’s Advisory Committee as the Music Theory representative, on the Executive Board for SAI Music Sorority, and as the Intern for Conservatory Admissions. When not playing flute, Bianca enjoys bullet journaling, brush pen calligraphy, and swing dancing.

Sara Prostko (Kenosha, WI) is a senior pursuing a Bachelor of Music in flute performance and a Bachelor of Arts in psychology. She is an active member in several ensembles including Wind Ensemble, Symphonic Orchestra, Viking Bassoon Ensemble (ViBE), and smaller chamber ensembles. Outside of the conservatory, Sara spends her time studying psychology in hopes of becoming a clinical psychologist and/or a professor. Outside of academics, Sara spends her time volunteering at a local pet rescue!

Kalysta Schwartz (Santa Rosa, CA) is an enthusiastic freshman studying music education, flute performance and Spanish. She was the principal flute of the Santa Rosa Youth Ensemble’s Repertory Orchestra and participated in her local county honor band her senior year of high school. She loves music and teaching and hopes to one day teach music to people of all ages and backgrounds, as she believes that everyone deserves the opportunity to enrich their lives with music. Because she has not had much formal music education, she is looking forward to learning all about her instrument and many others during her time at Lawrence, as well as how to share her new knowledge.

Rikke Sponheim (Shoreview, MN) a junior from the studio of Erin Lesser, is a candidate for the Bachelor of Music in performance and Bachelor of Arts in anthropology. Rikke is involved in several ensembles on campus such as Wind Ensemble, Symphonic Band, and Flute Ensemble. Rikke is currently thinking of doing a focus in biological anthropology, especially medical anthropology, but also finds looking at bones to be neat. Outside of school and music, Rikke enjoys reading, puzzles, tea, talking about dogs, and camping.

Helen Threlkeld (Denver, CO) is currently a freshman at Lawrence University and is pursing a double-degree in flute performance and biology. She has been playing the flute for 10 years and studied at the Denver School of the Arts. She has appeared on such stages as Alice Tully Hall at Lincoln Center in the National Orchestra Cup and has appeared in the pit orchestra for such productions as The Producers and Hairspray. Helen is currently playing flute and piccolo in the LU Symphonic Band and Flute Ensemble.

Hannah Elizabeth Tobias (Beloit, WI) is a senior pursuing a Bachelor of Music in flute performance with minors in pedagogy, education studies, and psychology. She is an avid chamber musician and especially enjoys bringing music into the community. In 2016, Hannah Elizabeth was a finalist in the Wisconsin flute festival collegiate competition and was principal alto flute of the National Flute Convention’s collegiate flute choir. She has performed for the College Light Opera Company, attended the Decoda-Skidmore Summer Chamber Music Institute and Aria Summer Music Intensive. Hannah Elizabeth has played in masterclasses for Alexa Still, Aaron Goldman, and Linda Toote, and is a proud student of Dr. Erin Lesser.

Kylie Zajdel (Waukesha, WI) is a freshman with aspirations to receive majors in music education and flute performance, with a minor in French. She graduated from Waukesha South High School, where she was Drum Major in the Marching Band. Outside of school, Kylie performed in the Milwaukee Youth Symphony Orchestra and the Youth Wind Orchestra of Wisconsin.