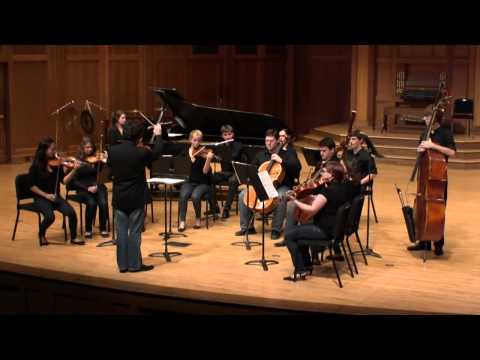 Students were introduced by ear to the Arabic mode called maqam Hijaz and were encouraged to improvise using the pitches in that mode.  We used a form called taqsim, which is an improvisation over a drone.  Members of the orchestra created the riffs (short musical ideas), basslines, melodies, textures and rhythmic grooves. Each riff or texture is represented by a hand gesture.  The conductor then uses “conduction” with these hand gestures to create the piece and guide the musicians as the piece unfolds.  – Matt Turner

Aaron Copland (1900-1990)
Appalachian Spring
Original version, complete ballet for 13 instruments
I. Very slowly. Introduction of the characters, one by one, in a suffused light.
II. Fast. Sudden burst of arpeggios starts the action. A sentiment both elated and religious gives the keynote to this scene.
III. Moderate. Duo for the Bride and her Intended – scene of tenderness and passion.
IV. Quite fast. The Revivalist and his flock. Folksy feeling – suggestions of square dances and country fiddlers.
V. Still faster. Solo dance of the Bride – presentiment of motherhood. Extremes of joy and fear and wonder.
VI. Very slowly. Transition scenes reminiscent of the introduction.
VII. Calm and flowing. Scenes of daily activity for the Bride and her farmer-husband.
VIII. Moderate. Coda. The Bride takes her place among her neighbors. At the end, the couple are left quiet and strong in their new house.